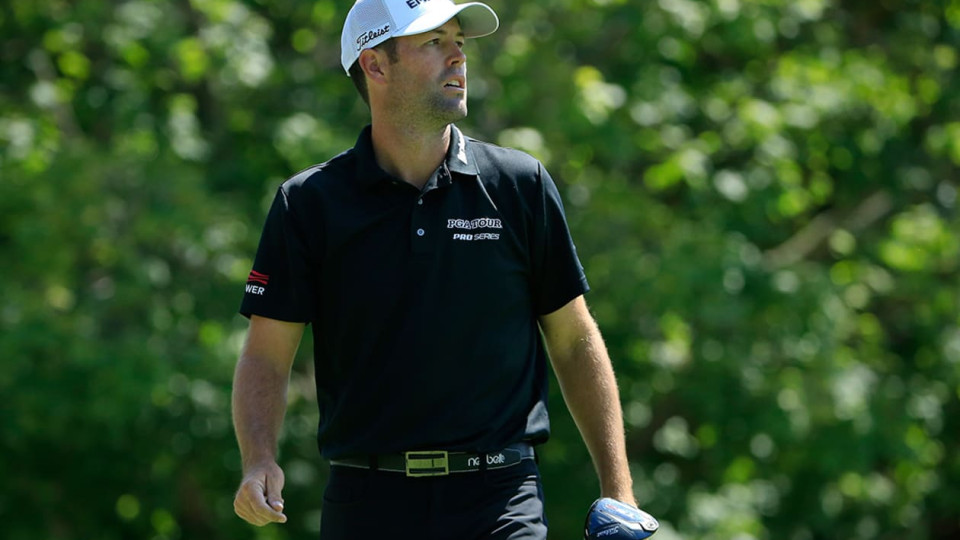 Round 2 Recap – Streb sits atop leaderboard headed into weekend

COLUMBUS, Ohio – It was a windy Friday in Columbus for the 12th playing of the Web.com Tour’s Nationwide Children’s Hospital Championship, but not even the wind gusts could stop former PGA TOUR winner Robert Streb from making a statement in the Buckeye State, posting a second-round 3-under 68 to move to 9-under 133 heading into the weekend. 2017 Mackenzie Tour – PGA TOUR Canada Player of the Year Kramer Hickok sits one back of Streb, followed by a host of players tied at 7-under 135.

“[It feels] a little different,” Streb said of holding the 36-hole lead. “I haven’t done too much of it this year, but it’s nice to be playing well, putting well.  Hopefully, I can keep getting some chances this weekend and see how we do.”

Streb, who entered Friday one stroke back of the lead, ran into trouble early at The Ohio State University Golf Club’s Scarlet Course. After picking up a bogey on his opening hole Thursday, Streb ran into the same fate on Friday, carding a five on the par-4 10th (his first hole of the day).

“I hit it way left,” he said when asked what led to the error. “I got a pretty good break and just basically guessed poorly on the green firmness.  I got through the green [on my approach shot], had a tough chip, and then hit a good one.”

The mistake ended up being the only one of the day for the Kansas State University alum, who kept his scorecard clean for the remainder of the round. Birdies on Nos. 12 and 18 allowed Streb to make the turn at 1-under 34 and join a collection of players who had become bunched atop the leaderboard.

After parring the first three holes of his second nine, the father-of-three needed something big to build momentum and break away from the rest of the pack.

That something big came for Streb in the form of an eagle at the par-5 fourth.

“That was nice,” Streb remarked after the round. “I wasn’t sure if I was going to cover the bunker or not.  It covered, I had a pretty good number, and luckily, it landed soft on the green and I had a good putt at it.”

The 2012 Mylan Classic champion would go on to par his remaining five holes, ending the day with a 68.

After finishing at No. 178 in the PGA TOUR’s FedExCup Standings this year, Streb looks to return to the PGA TOUR with a win this week and make up for a 2017-18 season that was full of struggles. The Oklahoma native made just 10 of 29 cuts, picking up a lone top-10 finish at the Barbasol Championship (T10), where he held a share of the 54-hole lead.

Unlike Streb, Hickok’s status for next season has already been determined.

After notching four top-10s, including a runner-up, in his rookie season, the 26-year-old ended the Regular Season at No. 23, earning his first PGA TOUR card at the conclusion of last week’s WinCo Foods Portland Open presented by Kraft-Heinz.

“I feel like I’m really just freewheeling it out here this week,” Hickok commented after the first round. “I feel like there’s a lot of guys that have a lot more pressure than I do, whether they’re trying to [regain] their PGA TOUR card or they’re trying to get to the PGA TOUR for the first time.  So my mentality is just way different.  I’m really relaxed and just got nothing to lose, so I’m just out there playing the best golf I can.”

That sense of freedom allowed Hickok to continue his strong play into Friday, picking up five birdies alongside two bogeys to finish the day at 3-under 68, moving to 8-under 134 for the tournament.

“It’s tough out there,” Hickok remarked. “You’ve got to be really patient. I hit the driver really well today, which allowed me to put myself in position to score, but even then you can still make a quick bogey.

“The whole game plan is just to limit the mistakes, and I feel if you limit the bogeys, you’ll be able to shoot some low rounds out here. It’s not about making birdies; it’s not a birdie fest, so just limit the mistakes as much as you can and it seems to be helping so far.”

* This week marks the beginning of the Web.com Tour Finals, a four-event series that concludes at the Web.com Tour Championship in Atlantic Beach, Florida, Sept. 20-23. Twenty-five PGA TOUR cards were awarded last week following the WinCo Foods Portland Open presented by Kraft-Heinz. An additional 25 cards are up for grabs during the four Finals events, as well as positioning for all 50 cards.

* Friday’s cut came at 1-over 143 with 75 players advancing to the weekend. Andres Romero made the biggest jump up the leaderboard with a 5-under 66 to make the cut, rising from T134 after the first round to T63 after Friday.

* Only two 36-hole leaders/co-leaders have been able to convert their lead into a victory in Columbus (Daniel Summerhays, 2007; Seung-Yul Noh, 2013). Through 23 events this year, five second-round leaders have captured a title at the end of the week, with the most recent being Sepp Straka at the KC Golf Classic.

* Leading the contingency of PGA TOUR Latinoamérica alumni in this week’s field is Sebastian Muñoz, who has already locked up his PGA TOUR card as a member of The 25. Muñoz carded a second-round 4-under 67 to move to T7, just three back of the lead.

* After a strong performance (T6) at last week’s WinCo Foods Portland Open presented by Kraft-Heinz to earn his first Web.com Tour Finals berth, Curtis Luck is again inside the top 10 at T7. The former No. 1 amateur golfer in the world is looking to earn his first PGA TOUR card after a 36-hole total of 6-under 136.