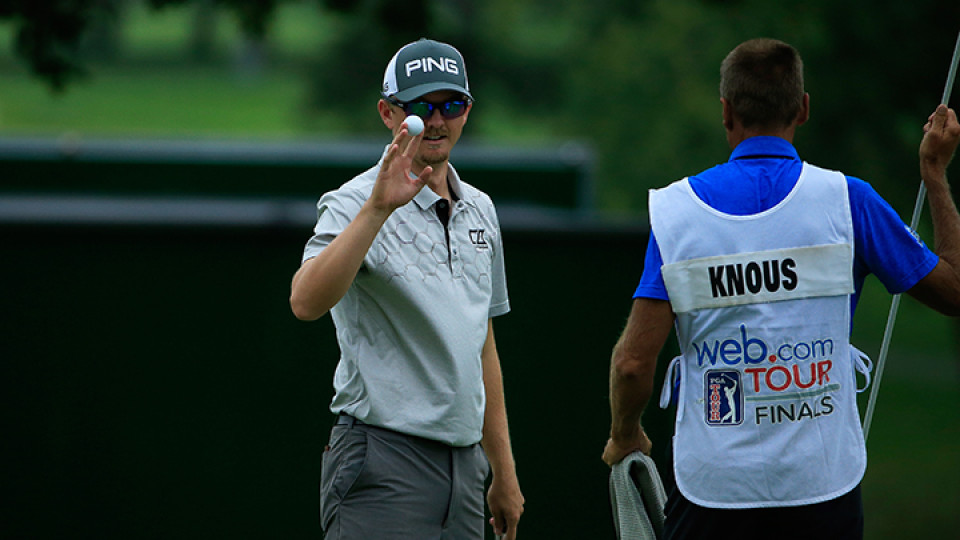 COLUMBUS, Ohio – In a round broken up by a weather delay in Columbus, Jim Knous and Robert Streb stayed one stroke clear of the field with matching scores of 12-under 201 heading into Sunday’s final round at the Web.com Tour’s Nationwide Children’s Hospital Championship. Knous tied the low round of the day with a 6-under 65, while Streb maintained his 36-hole lead with a 3-under 68. Joseph Bramlett and Denny McCarthy each sit two shots back at 10-under 203.

Making his career debut in the Web.com Tour Finals, Knous was on fire from the start, birdying the first five holes to jump to the top of the leaderboard. The string of birdies matched the longest streak of his Web.com Tour career after a similar stretch in the first round at the 2017 LECOM Health Challenge.

“Five birdies in a row obviously is a dream come true,” said Knous, a Colorado School of Mines alum. “But, I mean, I was just hitting shots good, hitting shots close to the hole. There really weren’t that many long putts. The putt on No. 5 was a downhill trickler about 20 feet, so that was kind of a bonus there.”

The father-of-one entered last week in need of a strong finish to end the Regular Season inside the top 75 on the money list to secure a Web.com Tour Finals berth.

“I mean, [last week] being on the bubble like that, [No.] 74, and knowing I needed a good finish to make the Finals and then doing it and playing well and finishing in the top 5 was huge. I was just so excited,” said Knous.

Knous is in the midst of a breakout season on Tour, with two top-five finishes already under his belt, including last week at the WinCo Foods Portland Open presented by Kraft-Heinz. He finished the Regular Season at No. 52 on the money list, and a win on Sunday would earn him his first PGA TOUR card.

While Knous is looking to reach the PGA TOUR for the first time, Streb is contending to regain status after competing on the PGA TOUR during the 2017-18 season.

“I putted really well the first two days,” said Streb, a Kansas State alum. “It was a little wishy-washy for a few holes today, then made some coming in.  So really nice to hang in there.  We’ll see how tomorrow goes.”

After birdying No. 2 for the second time in three days, Streb bogeyed the ninth to make the turn even on the day. He turned up the heat on the back nine with birdies at Nos. 12 and 15 before punctuating his round with a 25-foot birdie on the final hole to the delight of the crowd surrounding the 18th green.

“Yeah, [I was] just trying to get a tee ball in the fairway [on No. 18],” Streb remarked. “Hit a good second shot, came up a little shorter than I was hoping for, but obviously made a long putt and, yeah, gave me a good chance [heading into] tomorrow.”

Competing in 29 TOUR events this season, the Oklahoma native made 10 cuts, picking up a top-10 finish at the Barbasol Championship (T10), where he held a share of the 54-hole lead. The 31-year-old is a former PGA TOUR champion at the 2015 McGladrey Classic.

* This week marks the beginning of the Web.com Tour Finals, a four-event series that concludes at the Web.com Tour Championship in Atlantic Beach, Florida, Sept. 20-23. Twenty-five PGA TOUR cards were awarded last week following the WinCo Foods Portland Open presented by Kraft-Heinz. An additional 25 cards are up for grabs during the four Finals events, as well as positioning for all 50 cards.

* Since the tournament’s inception in 2007, five 54-hole leaders/co-leaders have gone on to capture the title in Columbus, with the most recent being Justin Thomas in 2014. Through 23 events this season, seven third-round leaders have been able to convert their lead into a 72-hole victory, with the most recent being Sungjae Im at last week’s WinCo Foods Portland Open presented by Kraft-Heinz.

* Georgia Tech alum Seth Reeves posted a third-round 6-under 65 to tie the round of the day and move into a tie for fifth. Reeves, who had a late-season surge to earn a Web.com Tour Finals berth for the second straight year, looks to join 2018 Web.com Tour graduates and fellow Yellow Jackets Anders Albertson and Roberto Castro on the PGA TOUR next year with a strong finish Sunday in Columbus.

* After carding a T10 finish at last week’s WinCo Foods Portland Open to earn a spot in the Web.com Tour Finals, Australian Curtis Luck has strung together rounds of 67-69-68 to sit at 9-under 204, just three back of the lead, heading into Sunday.

* Two-time European Tour winner Dylan Frittelli took the biggest advantage of Moving Day, posting a 6-under 65 Saturday to jump 38 spots up to T14 heading into the final round.

* While it is difficult to estimate exactly how much money is needed to finish in the top 25 of the Finals money list and collect one of the remaining 25 PGA TOUR cards handed out at the conclusion of the Web.com Tour Championship, below is how much money the 25th man on the money list earned in each of the past two four: