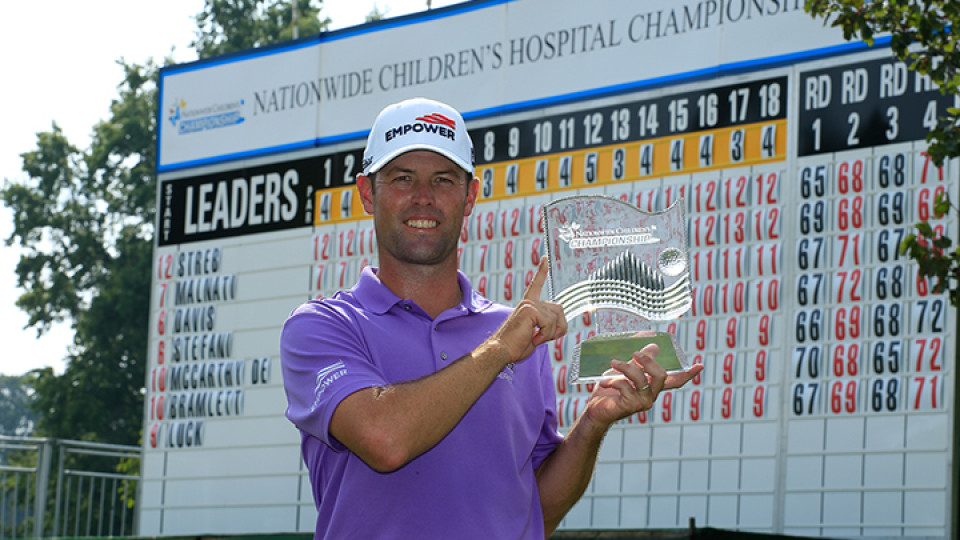 COLUMBUS, Ohio –  After capturing the 36-hole lead at the Web.com Tour’s Nationwide Children’s Hospital Championship, Kansas State University alum Robert Streb appeared calm and confident, remarking to media that he knew he had what it took to capture the title at the end of the week.

Streb backed up his claim with strong play in the final two rounds in Columbus, carding rounds of 68-71 on the weekend to finish the tournament at 12-under 272, enough to force a playoff with fellow PGA TOUR winner Peter Malnati. The 31-year-old would go on to par the first hole in sudden death, topping Malnati’s bogey to pick up his first win in a PGA TOUR-sanctioned event since the RSM Classic in 2015.

Streb, who held shares of the 36- and 54-hole lead, struggled on Sunday, parring his first two holes at The Ohio State University Golf Club’s Scarlet Course before picking up a bogey on the par-4 third. He moved back into red numbers with birdies on his next two holes, eventually making the turn at 1-under 35, remaining atop a leaderboard that at one point saw as many as six players tied for the lead.

The Oklahoma native turned Kansas resident would hit trouble again after making the turn, bogeying Nos. 10 and 11 to drop back down in the standings.

While Streb struggled, Malnati surged, posting a 5-under 66 in the final round to move into a share of the lead. A par from Streb on the last would send the two into a playoff, the third on Tour this season and the fourth in tournament history.

The duo faced trouble off the tee on the first playoff hole, causing each to hit their second shot from the immediate rough. Streb and Malnati both landed their shots on the green, but a par putt lip-out from Malnati would ultimately be the deciding factor.

“Peter’s a good friend,” Streb commented after sinking his par putt for the victory. “We both more or less achieved what we were trying to achieve [in securing a PGA TOUR card].  I would say it was probably a little more relaxed than normal.  Could have flipped a coin, I think everybody would have been all right.  It was nice to come out on top.”

With their finishes this week, both Malnati and Streb secured a return to the PGA TOUR for the 2018-19 season.

“It’s really nice,” Streb remarked. “It’s been a pretty big struggle all year. I played a lot and was not playing well, so it’s really nice to get that knocked out the first week.  [Now I’m] just going to work on improving and get ready for next year.”

“I can’t tell you how good that feels,” Malnati said of his return. “It’s cool and, you know, I’ve never really played this game to make money, but I don’t want to have to do something else to make money, either. So to get back to the PGA TOUR, it’s just a little bit of freedom.”

Davis entered Sunday six strokes back of the lead, playing in the fifth-to-last grouping. The 23-year-old didn’t let that deter him, however, notching a 5-under 66 to make a jump up the leaderboard. The performance was reminiscent of his win in Nashville earlier this season, where the Tour rookie overcame a six-stroke deficit in the final round to pick up the title.

“I was in a position where I was going okay,” Davis said, “but I still didn’t really have much to lose so I just went out there knowing that if I had a good round and kind of pieced one together – there wasn’t much wind today so I wasn’t sure I was going to get as high up as I did with that score, but it kind of worked out the way it has.  It’s nice to be up near the top.”

The finish was enough to move Davis into the mix, but with several groups still on the course, the Australian was forced to sit and wait, watching the leaderboard to see if the finish would be enough to lock up a card.

The solo-third finish came with a $68,000 paycheck for Davis, enough to secure the 2017 Emirates Australian Open champion a spot in The 50.

“Any good week will get you in,” Davis remarked of the Finals, “but you’ve got four of them as well, so you don’t have to do it all the first week.  If you don’t have a great week, you still have plenty of time.  So I just kept on telling myself you don’t have to rush and do it all now, but if you play really well, take what you get.  So I did end up playing really well over the last couple of days and it’s nice to be where I am.”

* This week marked the beginning of the Web.com Tour Finals, a four-event series that concludes at the Web.com Tour Championship in Atlantic Beach, Florida, Sept. 20-23. Twenty-five PGA TOUR cards were awarded last week following the WinCo Foods Portland Open presented by Kraft-Heinz. An additional 25 cards are up for grabs during the four Finals events, as well as positioning for all 50 cards.

* Streb becomes the sixth 54-hole leader to go on to capture the title in Columbus since its inception in 2007, with the most recent being Justin Thomas in 2014. Streb is also the seventh straight player to win when playing out of the final Sunday grouping.

* Shawn Stefani bookended his tournament with 4-under-par 67s to claim a solo fourth finish and lock up a return to the PGA TOUR. A late birdie on No. 17 ended up being the difference for the 36-year-old. The 221-yard par-3 played as the fourth-toughest hole throughout the week, but Stefani played it 1-under.

* While it is difficult to estimate exactly how much money is needed to finish in the top 25 of the Finals money list and collect one of the remaining 25 PGA TOUR cards handed out at the conclusion of the Web.com Tour Championship, below is how much money the 25th man on the money list earned in each of the past two four: